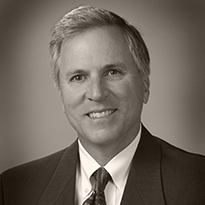 Russ began his insurance career in 1985 working for New England Life in Tulsa. During the early 90’s, Russ moved to an independent P&C agency where his focus became senior living facilities. In 1999, he moved his practice to Rich and Cartmill. After a brief period, he was offered an opportunity to join the ownership group and became one of the Vice-Presidents of the agency. As a shareholder, Russ has participated on the Executive Committee, chaired the building and growth committee, and served various other roles within the agency management group.

Russ is a member of the Independent Insurance Agents of Oklahoma. He is also a charter member of NCHA (National Council of Healthcare Agents). This is a small group of insurance agents that specialize in senior living facilities. NCHA is widely recognized by most insurance companies as one of the most dynamic group of specialists in the industry.  Collectively, NCHA agents and their respective agencies represent upwards of 20% of the senior living facilities across the U.S.

Russ enjoys spending time with his family and friends which include his three kids and three grandchildren.  He also enjoys fishing, hunting and golf along with many other outdoor activities.