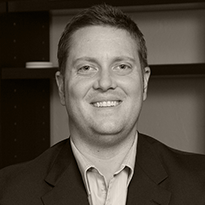 Chris Webb joined Rich & Cartmill, Inc. as a sales associate in the Spring of 2008.  His career in insurance began with the Liberty Mutual Group where he was promoted to territory manger over the states of Oklahoma, Arkansas and Louisiana.  Since joining Rich & Cartmill Chris has served the association of Independent Insurance Agents of Oklahoma City as President as well as a board member for the state association of Independent Insurance Agents of OK.  In 2018 Chris became a Shareholder in Rich & Cartmill.

Chris graduated from the University of Oklahoma with a BA in Marketing and there met his to be wife Angie.  Together they have steadily grown their family to include 4 beautiful children.  They reside in Guthrie, OK and love giving back to their church and missions close to their hearts.