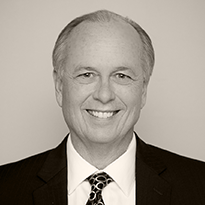 Ed Garlich joined Rich & Cartmill as a sales associate in March 2013, specializing in commercial insurance. Previously, he was with Federated Insurance Company for 23 years as a senior marketing representative. He consistently received the President’s Council and Distinguished Service awards, as well as numerous honors and recognition for his leadership in insurance sales.

Ed graduated from Southwest Missouri State University, where he earned his B.S. degree in Political Science.

Ed has served for the past decade on the Board of Directors of Youthfront, a non profit organization helping young people.

He and his wife Susan have three married children and 10 Grandchildren. His hobbies include hiking, biking, kayaking & fishing.