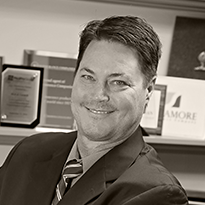 Kelly is a graduate of the University of Colorado with a Bachelor of Arts degree. Prior to that he attended the University of Kansas on an athletic scholarship. From 1992 – 2000 Kelly was employed as a bond field underwriter with both a regional surety and a national surety. He started his underwriting carrier in Des Moines, Iowa with EMC Surety and ended his underwriting in Kansas City with Zurich NA Surety. While with Zurich, he was responsible for all marketing and underwriting in the Oklahoma Region. In 2001, Kelly joined Rich & Cartmill as an associate producer and bond specialist. In 2006, Kelly became a partner with Rich & Cartmill. Kelly maintains several professional designations including (CIC) Certified Insurance Counselor and (AFSB) Associate in Fidelity and Surety Bonding.