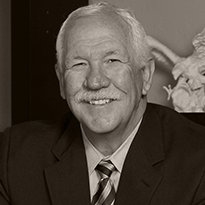 Kent graduated from the University of Oklahoma BBA) in May 1980.   Upon graduation, he went to work for his father, Bill, at Bradford Insurance Agency in Oklahoma City .   He specialized in commercial insurance sales.    He earned his Certified Insurance Counselor (CIC) designation in 1983 and his Certified Risk Manager (CRM) designation in 2013.  Kent’s brother Kyle joined the agency in 1982 and the agency became Bradford-Irwin in 1986 when Bob Irwin joined the agency.      Eventually Bill and Bob both retired and Kent and Kyle continued to operate Bradford-Irwin Insurance Agency.      Kent and Kyle joined Rich & Cartmill in January 2012 and became a shareholder.  Kent still specializes in commercial insurance sales and serves on the Rich & Cartmill Executive Committee.    He and wife, Martha, have been married since 1979.    Martha is retired from Mustang Schools after 29 years as a physical education teacher at Mustang Valley Elementary.     Kent and Martha belong to Church of the Servant United Methodist Church   Kent is also Past President of Satellite Athletic Association, a local youth basketball organization.    They have one son, Samuel and daughter in law, Emma and three beautiful grandchildren.   They reside in Oklahoma City.