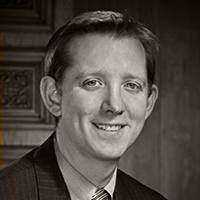 Scott works mainly in the healthcare, energy, and manufacturing sectors and is the endorsed agent for Professional Liability by the Oklahoma Osteopathic Association.

Scott is married to Meredith Selman and has five children.  Scott is a member of the Rotary Club of Tulsa and currently serves on the board for the Wauhillau Outing Club.  Scott is a fourth generation insurance agent as his great grandfather, grandfather and uncle were also all in the business.