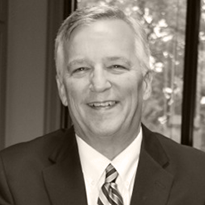 Thad began his insurance career in 1976 working in the claims department for Mid Continent Casualty Company in Tulsa. In 1978 he joined his family agency, Carl M. Leonard & Son, Inc., that was founded by his grandfather in 1941.  In 1992, he bought out his father and became president of the agency.  In 1994, Thad helped form and grow Bains West, Inc., a large regional cluster of independent insurance agencies and served as Vice President, Treasurer and was a Director of the Board.

In the Tulsa community, he has served on the boards of Ronald McDonald House, Thornton Family YMCA, Boston Avenue Methodist Church, and the Carnegie Elementary School Foundation. Thad is an avid fly fisherman and quail hunter.  Thad and his wife of 45 years, Susan, enjoy traveling, hiking in the mountains and spending time with their three children and four grandchildren.