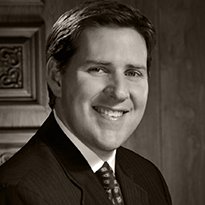 Vaughn and his wife, Natalie, have three children, Vaughn III, Eva, and Corbin, and reside in Tulsa.